We presented our project at the international conference  “On the Way into the Unknown? Comparative Perspectives on the ‘Orient’ in (Early) Modern Travelogues“, which took place at the Institute for Early Modern and Contemporary History of the Austrian Academy of Sciences and Humanities between 28 and 30 November, 2019.

The slides of the second part of the presentation, covering the digital tools and our plans for a text mining environment through an online portal can be found here. 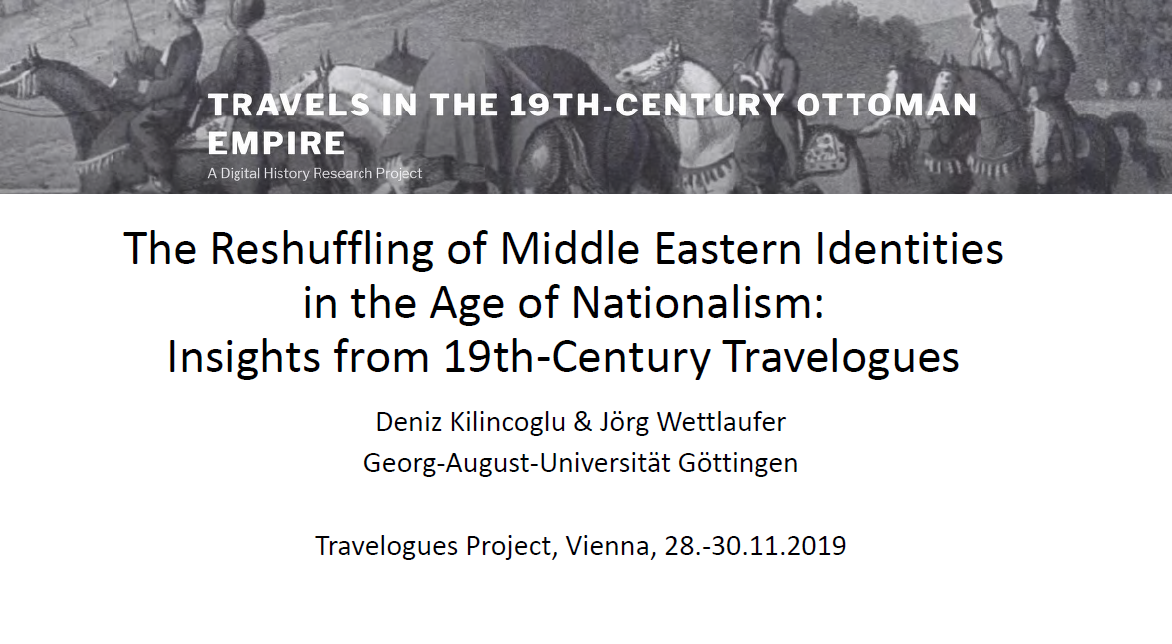 The Travelogues website was created within the broader project of Aikaterini Laskaridis Foundation to promote Greek culture, and especially Greek literature, on a national and international level. This website aims to make known the graphic materials found in travel accounts of journeys to Greece and the eastern Mediterranean from the 15th century onwards, and thus contribute both to students’ education and scientific research. An important part of the editions that constituted the database of the website belongs to the Historical Library of the Foundation.

There is an exhaustive bibliography, and of course, the collection of graphic material available on the website.

An Austrian project on German-language travelogues:

Travelogues: Perceptions of the Other 1500–1876 – A Computerized Analysis

The long 19th century was the age of a rapid and radical transformation for the Ottoman Empire. The rise of nationalism among various ethnic and religious communities of the empire was one of the most defining factors in this transformation. Similar to other cases in Europe, nationalism paved the way for the emergence of new identities, and consequently the redefinition of the self and the “other(s)” at both personal and communal levels. This project aims at revealing, gathering, and processing the rich, yet hitherto untapped sources of information about this socio-political transformation, namely, the travelogues. Through observing this process in the outsiders’ (i.e. European travelers’) accounts, it also aims at shedding light on the European perceptions regarding the transformation in the modern Middle East. The project follows a Linked Open Data approach that provides the extracted entities and information as resources for multimodal research approaches.

As a first result of the collection and preparation of the data from these rich and untapped historical sources (i.e. travelogues), we will identify and analyze various descriptions of and narratives about the sociopolitical change in the 19th-century Ottoman Empire. Our initial, yet mostly manual, examination of the random samples from this literature already testifies to the existence of a rich source of information that provides valuable information on various aspects of identity (re)formation in the late Ottoman Empire and the European travelers’ perceptions of these processes. As a later step, we plan to link the extracted metadata about people, places, publications, and itineraries to other resources such as authority records and wikidata, and make our findings available as machine-readable Linked (Travel) Data. Finally, we aim, through our portal, to provide the scholars and research groups who are interested in the Middle East with an open, rich, and reliable resource for first-hand descriptions and depictions of the various aspects of the socio-political change in the long 19th century.